Articulation Over the Years–Video and Explanation of Multiple Speech Diagnosis 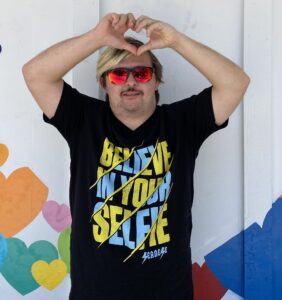 I’ve wanted to do this for a long time…and thanks to COVID-19 Quarantine I actually HAVE the time to do it!

Sean has several speech disorders and I will go through each of them and how they have affected his articulation. To demonstrate his progression as he grew up–and he continues to improve as an adult–I took a trip down memory lane and made a compilation of videos showing his speech at age 3, 6, 10, 14, 18 and 25. He improved between every one of those ages for multiple reasons. Here’s the video and below is the explanation of each of his speech disorders and

Both Oral Motor Apraxia and Verbal Apraxia. Many children with Down syndrome do and it’s critical they be assessed early for this speech disorder. Find a great private speech therapist for an evaluation  because the intensity of the therapy and the techniques do vary. Here’s a great website to reference:

Whenever Sean has a new word he hasn’t said many times he always mis-pronounces it…for example when he was taking a trip to Las Vegas he said he wanted to play “Cramps” meaning ‘Craps.’ And when he received his HUD Voucher he called it a “Head Basher.” This mis-pronunciations are soo funny…but so not. It typically takes him saying something 100 times before he says it right.

That means he doesn’t “hear” the sounds that you and I hear so that makes it harder to say them correctly. We knew Sean had a hearing impairment when he was 2 months old.  (it’s critical to have your child’s hearing tested early and often.) He has had several sets of ear tubes over the years and we baby his good ear. I was afraid from the beginning he would lose the hearing in his good ear–that plus the studies on how slow our kid’s speech develops,–we started with basic sign language immediately. Our kids take in and understand SO much–they just need the tools to spit the information back at us. Why do you think one of the first words all kids say is “No”? Because that’s what they hear us say the most. So it’s important to not just talk to our kids but repeat the words they need to say, and give them alternative means of communication.

With IPAD and IPHONE Apps today there is no reason every child can’t have an Augmentative Communication Device (And guess what? GPS tracking can be but on it too!)

Here’s info on what Augmentative Communication is:

For school-age children the school district can assess them for Assistive Technology and even provide it. But don’t get stuck in a fight when your child needs it now. There are a lot of used IPhones out there that can be had on the cheap.

He couldn’t be understood at all until after he had a palate expander and braces–in fourth grade!  Even then he was still difficult to understand and said “gog” for “dog” and mixed up many sounds that needed tongue placement front to back.  (I wrote about our orthodontist experience in my second book, Who’s The Slow Learner? Adventures in Independence.)

So why can you understand him on Born This Way?  Most of what he says he has said before–and the more you practice the same phrases the better you can say them.

“Ladies Man” comes out clear because he tells everyone he is one. That phrase is repeated several times a day.

He loves Justin Bieber, but pronounces it “Beaver”  Say it, and pay attention to where your tongue and lips are when you say ‘Bieber vs Beaver.’

Sean had speech therapy until age 20 but his biggest improvement came when we turned his stubborn streak into determination. Determination to speak more clearly. He knows he is difficult to understand, and he knows when someone doesn’t understand him and politely nods and smiles as though they do. But what motivated him?

In a nice way we always ask him, “Say that again, I didn’t understand your words.” And if we still can’t understand we will repeat what part we did understand and ask what the other phrase or word he’s trying to say. We are calm and  patient–so he doesn’t get as frustrated as he could get.

Sean has wanted to be on TV since the minute Becky Jackson took Glee by storm. So I explained to him that to be on TV people have to understand your speech. I really never thought he would end up on TV, but when the dreams are articulated, then giving the tools to reach the goal won’t hurt. At one point he wanted to play on the Laker’s basketball team.  I didn’t tell him he was way too short…I told him he had better practice. And practicing basketball is good exercise, so he benefited from trying to reach his goal.
(pun not intended)

Because he wanted to be on TV HE was determined to work hard on his articulation both on his own and in therapy sessions.  If he had no motivation I can assure you he would have more captions than he does. If you are recording the show–close your eyes and listen. Then watch the same scene again with the captions. I’m interested to hear your thoughts on his articulation after doing that.

And that brings me back to school–and life.  Anything that is taught, any therapy that is provided needs  to be meaningful to the person learning and receiving the therapy. If it’s not then the interest and drive to learn will be lost.

Another factor that made a difference in Sean’s speech was being included in regular education classes with many talkative children. They were his constant good speech models.

And it was  very interesting how his classmates would always know what he was trying to say and became his interpreters when the teachers couldn’t understand him.

Sooo…Bad mom of the year award winner goes to…ME! Sean had just been cast for Born this Way when his orthodontist pointed out to me that his top teeth and his bottom teeth only touched each other at one spot. ALL these years I thought Sean was a picky eater! NOOO….he COULDN’T CHEW! So we saw an Oral Surgeon and it took a couple of more years before he had 6 weeks in a row that he didn’t have ANYTHING scheduled so he could have the surgery. It’s a brutal surgery. They basically break the top and bottom jaws and then align them…his mouth was wired shut for 6 weeks and he lost 18 pounds on his liquid diet. He then had over 8 months of chewing therapy to learn how to chew his food….for the first time in his life! This also improved his speech and while he had to wear braces for another year today his speech is pretty clear…except when Apraxia rears its head and he’s trying to say something for the first time.

I hope this article will provide some encouragement to never ever give up. Our kids can make progress in many cases (and please seek out augmentative communication devices sooner rather than later). Keep seeking information, keep accessing therapies and keep encouraging your child.