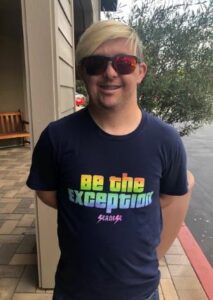 Our journey for providing reliable independent living is driven by the fact that our son with Down syndrome is an only child with his aunts, uncles and cousins living many states away. We thought we had accomplished that goal by providing him with a living situation to last his lifetime after we are no longer here to supervise and organize his living situation. Recently we discovered that was not true.

At age 19 we moved him into a private-pay independent living community. It had previously been an assisted living facility and all 50 rooms were converted for adults with intellectual disabilities. We thought THAT was the answer. All of the experts told me it would become like an institution with that many people in one place. Sadly they were right. In just six months it became more about the staff than the residents and Sean ended up being evicted. His behavior was “off” and at the eviction meeting it was discovered they had been giving him an AM medication during the PM which caused the behaviors.

Three years later Sean received his HUD voucher — we thought THAT would be the answer. With the Housing and Urban Development voucher Sean pays 1/3rd if his income towards the rent and the HUD program pays the rest of the rent on his apartment. In our area there’s no “Projects” so Sean rents an apartment in a regular apartment complex that has 10% of their units in the HUD Section 8 program.

In January this year I was talking to his apartment manager and she told me that their 30 year contract with HUD had ended—and the management of the apartments were about to give 60 days notice to all of the residents in the Section 8 units to move out!

My heart hit my stomach when I heard this. Thankfully HUD increased their minimum monthly rent payments so the disparity between the HUD maximums and the amount the typical residents are paying is minimal—for now.

It took 1.5 years to find the apartment Sean is in now. The wait lists for apartments that accept HUD Vouchers is long—in some cases several years long. To learn that the apartments could end their participation in the program at any time rocked my confidence that we had found the answer for Sean’s future.

What About When I’m Not Here?

When the apartment manager told me the program may have ended all I could think was, “What if I was already dead?” It took two years and a lot of effort to find the place he lives in now—I just don’t think Sean could navigate that by himself—perhaps his supported living agency would help—but its daunting to imagine him having to find a place, arrange the move, pack his belongings and then put everything away…I just can’t imagine it happening without my help.

Sean loves his community. He is friends with his neighbors—but apartments are so transient and people move in and out.

We would like to buy him a condo, so his neighbors are more stable, and he would have access to a swimming pool and other community amenities—but we wouldn’t be allowed to rent it to him under the HUD program. And we can’t afford to make a second house payment either—we are close to retiring so the down-payment and the extra house payment just isn’t realistic.

I had contacted a local non-profit with my idea. This particular non-profit was started when the Institution System was being dismantled. Group Homes were being opened by individuals and the California property values were escalating. Many of the group home owners were selling the homes after just a few years and leaving their residents homeless. So a non-profit began buying the homes and contracting the support services. At the time I talked with them they had 80 group homes.

My idea–my DREAM–is to create an inclusive community of friends. I asked the non-profit to purchase 10 condominiums within walking distance to a shopping center that includes a movie theater or a bowling alley, grocery store and restaurants. The condos should NOT be next door to each other but in the same complex so the residents can walk to a friend’s house but also be inclusive and allow them to meet their typical neighbors. Having a swimming pool in the complex and a community room is critical for group get-togethers. I envision a weekly potluck dinner with the Supported Living Staff (SLS) helping their clients prepare the food to share. But not just the SLS staff and the residents at the dinners—each resident should invite a couple of neighbors to join in the fun to facilitate the greater community inclusion. The residents can have monthly meetings to schedule plan social outings all facilitated by the SLS staff.

While the non-profit liked the idea the director stopped responding to my emails months ago—either he isn’t there anymore or they lost interest.

Discovering a Source of Money

I had all but given up on the idea of ten friends in the same condo complex with SLS staff provided by our local regional center.

And then I attended a seminar to learn how I could help Sean with his t-shirt business (seanese.com) and learned about a business idea. I’m in a mentoring program learning how to private label products and sell them on Amazon. I’ve designed some products and if the math pans out those products will produce approximately $6,000 a month in profit. And then as I add more products the monthly profits increase. So now I could buy Sean a condo…but if I keep adding products then maybe…just maybe…I can create a non-profit to donate the excess profits to and buy those ten condos through the non-profit! Then the non-profit can rent Sean his condo using his HUD voucher “reasonable accommodations” through HUD would not be an issue.

And after the first ten adults with intellectual disabilities are settled then we can do it again with the next ten….and the next ten…and so on.

In California the property values are extremely expensive. So the down-payments to get the mortgage to a reasonable monthly amount will need to be in the ballpark of 100-$150k. Then the mortgage, taxes, insurance and association fees will be under the maximums HUD allows for rent and leave a few hundred each month to go into savings accounts for repairs and replacing appliances, hot water heaters, flooring, etc.  Our state Regional Centers provide the SLS Staff, so we simply need a Director and down-payments to get started.

If you have ideas for products that can be private labeled. If you have products you have created and would like to sell them to me to sell on Amazon please let me know. As soon as I’ve repaid the start-up costs of this business I’ll start saving the excess profits and work on starting non-profit. Hopefully within two years we can start buying the condos!

Will you help the dream become a reality? Will you Be The Exception? Please sign up for our email list so we can notify you when the products will be available. And please order the products that will be listed on EssentialsEasy.com soon and help contribute to the independence of adults with intellectual disabilities.

For more information on the yet-to-be-established non-profit see the page “Foundation for Inclusive Living” on this website.

**Update: The Mentoring Program was shut down by the Federal Trade Commission for Fraud….yep. I was duped. I am still looking for products to sell on Amazon and have one product listed there currently. I still have hopes to start this non-profit but need to do research on available grants before investing the time and money before starting the non-profit.